Are you sure?
Confirm
​
OK
Back 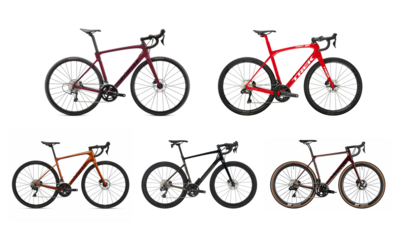 Published: August 20, 2022 4:44pm
Endurance road bikes are one of the most popular road segments in the past years. They offer much of the same performance as a more traditional road bike but usually have either a less aggressive geometry, a more compliant frame, or both.

Endurance road bikes are designed to be more comfortable both in terms of riding position, and frame stiffness. Your typical endurance bike will generally put you in a more upright and less stretched out position. For many this position is more comfortable and they are able to spend more time without pain on their bike. The endurance spectrum of fit is quite wide. Some models are only a few millimeters shorter in reach or taller in stack (or both) compared to the corresponding "race" bike from the same manufacturer. Others are significantly different with 10+ mm less reach, and 10-20mm more stack. Picking the right endurance bike for you will depend on your mobility, core strength and riding history.

Many endurance bikes will not only use geometry changes to help make the rider more comfortable, they will also make adjustments to the frame construction to improve "compliance" - the amount a frame will isolate the rider from rough roads and impacts. There are two ways manufacturers accomplish this: By using the carbon layup to increase the amount a frame bends, or by adding frame features such as Trek's Iso-Speed and Specialized's Head Shock to actively act as suspension for the rider. While these inventions do more than just modifying carbon layup, they do add weight and complexity to the bike.

It's worth noting that some riders are completely comfortable in a very aggressive position for long periods of time even on rough roads. These riders typically have exceptional mobility, core strength, and years of 500+ hour seasons behind them.

Below is a graph consisting of the stack and reach of each model. While it doesn't tell the full story of how each bike will fit, it does provide an apples to apples comparison of what the baseline fit geometry looks like. If you are unfamiliar with stack and reach or its influence on fit check out our post on Fit Geometry.

Fit and Sizing on the Specialized Roubaix

The Specialized Roubaix was one of the first endurance bikes. It uses both carbon layup modification and Specialized Future Shock suspension to isolate the rider from road vibration and impact. It is available in eight sizes from 44cm to 64cm. The 64cm bike is the largest bike in this comparison and is one of the biggest bikes available in general. It is worth considering if you are a very tall rider (>6'8 or 203cm). The size jumps are relatively small and consistent and the bike is one of the more conservative geometry bikes in the comparison.

It is interesting to compare the Roubaix and Domane (arguably the two most popular endurance road bikes) geometry as you can see a very different philosophy. The Domane focuses mostly on stack growth, while the Roubaix has a more progressive and predictable growth rate. Additionally the Roubaix is a less aggressive bike up to size 54cm (which confusingly is almost an identical fitting bike to the Domane 56cm), and then the lines cross and the Domane becomes more conservative.

Fit and Sizing on the Trek Domane SL/SLR

Like the Roubaix above, the Domane is one of the original Endurance bikes. Additionally like the Roubaix the Domane uses both carbon layup and active suspension to isolate the rider, this time in the form of Trek's IsoSpeed decoupler system. The Domane is available in eight sizes from 47cm to 62cm. Interestingly the Domane has a very small variance in reach across all the sizes - it has only 24mm of reach from it's biggest to smallest size. Compare this to the Roubaix which has 51mm of reach or the Canyon Endurace which has 71mm. Is this a bad thing? Not necessarily, there are other ways to add/subtract reach from the fit of the bike but this relatively small variance does lead to potential fit issues.

Fit and Sizing on the Giant Defy

The Giant Defy is an endurance road bike that comes in six different sizes ranging from XS to XL. Unlike the Domane and Roubaix the Defy doesn't use any active suspension technologies to improve compliance, instead relying on frame layup and shape. The growth rate of the Defy is interesting as it is somewhat variable. Between the three small sizes (XS, S, M) there are relatively small jumps in the size and then from the three large sizes (ML, L, XL) there are larger jumps. With that being said the Defy is the most "average" bike in this category with most sizes falling right in the middle of all the other bikes we are comparing.

Fit and Sizing on the Cannondale Synapse

The Synapse is Cannondale's endurance offering. It comes in seven sizes from 44cm to 61cm. Like the Giant Defy and Canyon Endurace the Synapse doesn't use active suspension technologies to dappen the ride, instead it relies on the layup and manufacturing of the frame to make for a smoother ride. The Synapse generally has a more aggressive fit than the other bikes in this comparison - it is a good choice if you are looking for more performance but don't want a pure race bike.

Fit and Sizing on the Canyon Endurace

The Canyon Endurace is available in eight sizes from XXXS to XXL, and has by far the largest variance in actual size in this comparison. The XXXS is one of the smallest bikes available anywhere. One of the interesting considerations is the large jump in reach from the XXS to XS (21mm) and L to XL (17mm), which in both cases are almost as large as the total reach variance of the entire Trek Domane size run (22mm). If you are in between these sizes it might be worth looking at one of the other other options that fall in between sizes such as the 47cm Domane or 44cm Synapse on the small end or the XL Giant Defy on the large end.

Athletes from around the world use MyVeloFit to improve their cycling position. Whether you are a veteran or new to the sport, MyVeloFit can help you improve your position.